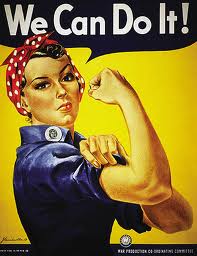 I once was a union maid. Singing along with my soul father Pete Seeger, I turned 13 in a world where the unions, which had little to do with my life, existed to make workers feel appreciated, keep their bellies full and protect their rights. I would have followed “Dad”  and Uncle Woody to the ends of the earth carrying placards, recruiting for the unions.

Practical experience, however, has taught me skepticism.

In 1988, I went to work as a teacher in the state of CT, rejoicing that unlike AZ, where I had earned my certification and where no unions represented teachers, CT offered membership in a local chapter of the National Education Association.  I served on the bargaining committee and was part of a team that won my district some important concessions.  Then, after twelve years of fighting the politics of bureaucracy vs the arts, after feeling castigated for my perceived iconoclasm, I decided it was time to leave the profession.

Had I been a true devotee of my union, I would have stayed on indefinitely.  I had tenure.  I didn’t have to fight, didn’t even have to work very hard anymore.  My contract, buoyed by my Union membership, would have allowed me to get away with almost anything short of criminal behavior without being fired.  I could have followed in the footsteps of so many teachers who had gone before me, sleeping through classes, disengaging further and further from education, sitting for hours in the teachers’ lounge complaining about my lot but doing nothing to change things,  safely and securely ensconced in my job.

Instead, I saw that I was becoming ineffective.  I was distracted by personal traumas and exhausted from the constant round of fundraising and fighting for auditorium time that constituted much of my life.  I couldn’t focus on the student writing I was supposed to be coaching, and I feared allowing my negativity to rub off on the kids.  Nothing is worse for education that an ineffectual teacher, so I left.

And that’s when I found out just what the union had really done for me.

Which works out great for those teachers who stay  – even those who stay too long — from youth to age.  Had I been able to max out with 37 years in the system, I could have had a pension that exceeded my working income, and I would have had lifelong healthcare benefits.  But I began teaching at 50; I was hardly going to make it to the end any way I sliced it.  Today, at 65, my social security looks like I didn’t work for twelve years, and I have no pension.  The union did a great job for the one group and totally screwed the others.

Basically, the union made it possible for me to keep my job forever.  But it failed to protect any alternatives to the ties that bound me to the system, as it failed to allow the system to realistically assess my worth.

No union can make a perfect system.  None should promise to do so.  The union I am affiliated with now made promises, got commitments from management but the enforcement of all the concessions is a huge task, and in our case, implementation forced whole segments of the work force to compromise their well-being and/or to sacrifice their jobs altogether.  For the most part, the union shakes a hefty stick and makes noise but falls short real advocacy.  Yesterday the union actually gave credence to a management censure of a colleague who is dressed too well.  He breaks no rules, he comports himself professionally, and he even wears the required uniform.  Yet the union allowed his time and theirs to be wasted over nonsense.

There is no panacea.  No union can promise universal satisfaction any more than any politician can.  I don’t blame the unions.  I blame myself.  I expect too much.  Employers will exploit workers every chance they get, and workers will take advantage of any opportunity to bilk the employer.  It’s the way of the world.  Why do I keep hoping there is any protection from it?