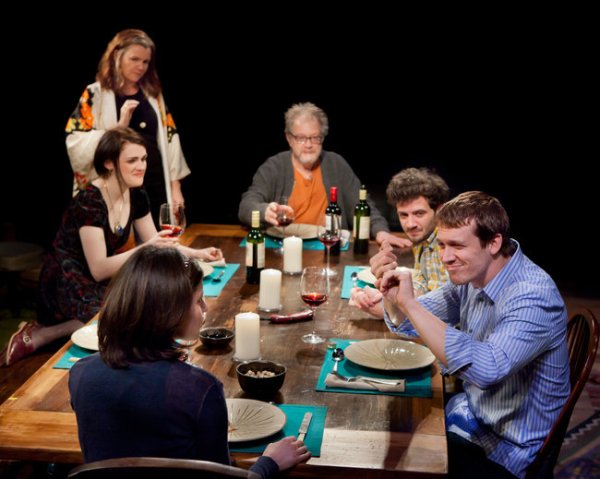 The cast of Tribes. From left, around the table: Mare Winninham (standing), Jeff Perry, Will Brill, Russell Harvard, Gayle Rankin (back to camera) and Susan Pourfar

After a performance of Nina Raine’s Tribes, directed by David Cromer (now playing at the Barrow Street Theater), the other night, I was in the lobby as a group of mostly women made a very big deal over Russell Harvard, the actor who played Billy.  He was great, don’t get me wrong.  But he wasn’t by any means the best in show.  That title belongs to Mare Winningham, playing his mother, a smolderingly constipated housewife eclipsed by the various shadows her family members cast.

It’s hard to play the kind of obstructed creativity that this mother is about to burst from, but Winningham embodies it.  There is no overt anger, no rage in her demeanor, just a seemingly congenial family person who seems to have everything she could want.  But in her eyes as she watches her family unravel in front of her, in her voice as she argues about the words in her detective novel or the decision to have company visit, in her tiny flitting fingers that are incapable of stillness, the combustion seems imminent.

Winningham’s Beth resonates for women of her generation (although Beth is a full decade older than the actress, which, by the way, seems like a very brave choice for an actor who competes with women who would kill to be able to play 50 again, and there’s no real going back).  Her husband Christopher (Jeff Perry), retired from active work, spends his days pontificating or studying.  Satisfied to lounge around while his faithful mate does the chores and keeps the family engine running, he is all too quick to upbraid his children, to demean his wife, to spout pronouncements of superiority wherever he can.  He is neither a good man nor a bad one, but his rages are dangerous, caustic, razing the stanchions of his wife’s and offspring’s self-esteem.

These are people who have lost the art of hearing.  They are, as Director David Cromer said in an interview, “All funny, smart, loving good people who still screw everything up.”  Billy, the youngest child, is deaf, but his disability is only partly the result of his lack of physically hearing, and the others are the ones who are most handicapped.  Deafness, insists Billy’s girlfriend Ruth (Gayle Rankin), herself in the process of losing her hearing, is a handicap, despite what political correctness would have us believe, and every member of this family is profoundly deaf.  Every member except Beth perhaps.

Daniel’s (Will Brill) ability to hear is failing as the voices in his head increasingly drown out those of his sister, brother and parents; he is a failing academic floundering for ballast.  Sylvia (Susan Pourfar), the sister, an aspiring opera star, can only hear what pertains to herself, what negates or supports her growing self-doubt.  Christopher hears only what he wants to hear, and he is so enamored of his own voice, that that is what he prefers to listen to most of the time.  For Beth, the crux of her life has been engaging with these bright, complex people, and it is suddenly clear to her that engagement was perhaps superficial, that none of them has ever really let the others in.

Beth is trapped in a whirlpool, and her great sense of humor, her ability to compartmentalize aspects of their life, her resilience are fraying all at once.  Suddenly the great achievement of her young adulthood, her crowning accomplishment — that Billy need not sign because he is so adept at lip reading and making sense of spoken language in English and in French — has been rejected.  Billy wants to be more deaf, to sign and to eschew the hearing world.  Daniel and Sylvia, who resent Billy as much as they love him — and Daniel needs him — cannot seem to find their own source of sustenance.  They look to Beth to save them, but she, now suddenly groping for a buoy of her own, has nothing left to offer. 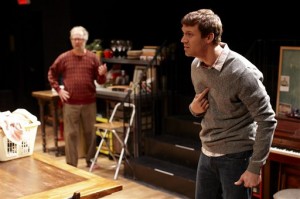 In each moment, Winningham’s small frame bends a bit more, walks a little less deliberately, seems a bit more fragile.  It’s subtle, but it’s there. She has nurtured this brood, this childishly demanding spouse and their eclectic offspring, and she is swirling in what feels like failure.  The only one who has any strength at all is Billy, and he has found himself by rejecting her gift.  The rest of them are stuck, mired in their choler, their resentments for things they feel they should have had but never did.   The cacophony of their self-pity inures them to all but the whirr of their encroaching panic.

Beth needs silence so that she can find the true sound of her own voice, but as anyone who knows deafness will tell you, there is no silence in the land of the deaf.  There is persistent, inescapable noise that shatters all peace.  And Beth’s notes are left muffled by the growing din.

But truly giving and never resentful, Winningham infuses a last burst energy at the end of the play, just after the lights come up for the curtain call.  Still in character, Winninham, nearly drained by what has transpired,  wraps herself around Daniel, whose last moment has emotionally destroyed both the actor and his alter self, and she holds him for a moment while he recharges himself with her love.

Now playing at the

One thought on “A Woman of Valor”