My most salient memory is of his knuckles. 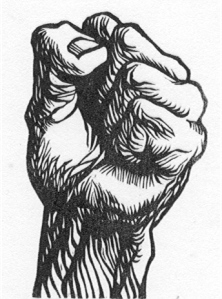 Suspended above my head, poised to strike me, they belied the generations of Yankee prosperity, the privilege of his youth.  They were the joints of a laboring man, gnarled, swollen, yellowed with age, frostbite and continual paper cuts.  The hands were enormous, muscular, striated with bulging veins.  Ominous.

“Do you dare say that again?”  he thundered.

Knowing full well that my words were a declaration of war, I replied, “I am never going to church again.”

His hand did not change position.  It trembled, aching to complete its mission, but it remained in midair, creating a comical, cartoonish image of frustration.

“Daddy. . . ” My voice broke.  How could I make him understand? I hoped he’d drop his arm to embrace me, to encourage my preteen independence.  “I-I just don’t believe in it anymore.  It stopped making sense.”

He dropped his arm and clenched his fist, pushing the veins to greater prominence,  and bit down hard on his back jaw. His rain watery eyes clouded over.  The concept was beyond his ken.  Never in his fifty years, despite his self-imposed life of hardship, had he ever considered the absence of “sense” in his religion.  How could this child, this female child, question his truth?  He shook his head.  The light from the rising sun streaming in through the picture window caught his baldness and cast a halo over him.

“This is not an issue to be discussed,” he barked.  “You have no choice.  I say you will get dressed, and you will come with us to church as you always have.”

“Because I said so.  I tell you what to do, not vice-versa.”

“I should be allowed to choose.  You cannot legislate belief, Daddy.  I don’t believe.”

“Nonsense. Of course you believe.  What is not to believe? The Lord our God is omnipotent, and He is Everywhere.  He is love.  God is Love.  Someday you will see him, and all will be proven.  You believe because it is true.”

I knew argument was pointless.  Half a century before, his grandfather had whispered Dutch Reformed rhetoric into his ear at birth, and his infant brain had embraced the dogma. 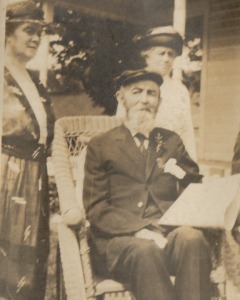 God had presented Himself to my father first in his twelfth year, making His presence known by robbing him of his father.  Daddy knew he deserved this show of divine wrath because he had taken the Lord’s name in vain the day before.

Then again, at seventeen, when he had prayed that his eighteen-year-old wife be spared to care for the infant daughter he had bred out of wedlock, he had accepted unquestioningly God’s decision to take the young woman into Heaven along with the son she was attempting to bear him.  Not long after, as a medical student in New York, he again trusted God’s wisdom in punishing him for performing an abortion on his partner’s girlfriend; he was dismissed from Columbia without appeal. He had willingly attached himself to the wheel of retribution and had paid for his sins ever after by refusing to allow himself to experience any joy.

His arm, still fisted and poised to strike, must have tired because he stretched and reached over his head, resting the hand on the bony top of his head, forming, with his huge mitt, a skullcap of sorts.  So priestly did he look that I averted my eyes.  I knew I should feel shame, but I hated his joyless God, and I wanted to prove to him that his was not the only righteousness.

“Daddy, I don’t understand why you care.  Why does it matter to you if I go to church?”

“I will not.”  I said it quietly, hoping that the hush in my voice would still the turmoil in his soul.

“How dare you defy me?  Go get dressed.  We leave in twenty minutes.”

The veins in his hands pulsed in rhythm with the pounding of my heart.

“I won’t,” I answered.  I was calm now.  Nothing would move me.  I was not willing to carry his cross anymore, to seek the salvation he was so sure he had thrown away.

His whole body quaked now as he held himself back.  I think he wanted to kill me.  I was the incarnation of all his failures.  His failure to fulfill his father’s dream of a medical career, his failure to appease his mother’s disappointment at his wrong-side-of-the-tracks, shotgun teenage marriage, his failure to be a real father to my half-sister, his failure to impose his fundamentalism on my mother.  I saw my weapon then, and I grabbed for it.  At any moment he might lunge at me, attempt to crush me with his hands.  I had to defend myself.

“Daddy, you know Mommy doesn’t believe in it.  You can make her go to church, but you can’t make her believe what you believe.”

“Nonsense.  Your mother shares my beliefs.”

“Charlotte!”  He screeched toward the kitchen where she was hiding behind breakfast preparation.  “How dare you confuse this child?”

“Leave her out of this, Daddy.  She didn’t do anything.”

“She is poisoning your mind with doubt.”

“No.  Mommy would never contradict you, she’d never admit you’re wrong in front of me.  These are my feelings, my thoughts, my doubts.”

His face was bluish as the veins in his temples struggled to carry the oxygen to his brain.  I feared — and hoped — he’d drop dead right there, right then, a victim of his apoplectic obsession with a God I detested.  He rubbed the back of his hand across his forehead, and the veins glistened with the moisture they collected.

“I just know my mother,” I continued.  “And she could not possibly embrace your idiocy. She is, always has been, always will be a Jew.”

There.  I had said it.  I waited for him to fall, to convulse with pain and then to disintegrate into a crumbled heap.  Surely this knowledge, my giving words to the unspeakable truth, should be as terrible and as swift as the sword of Christianity he held dangerously over my head.

We had never admitted to one another that our life in the church was a lie.  That those late Sunday arrivals, our oversized family marching in to fill a pew at the center of the nave, were mere display.  My mother, the beloved of his life these past sixteen years, the mother of his seven recent progeny, was a Jewess.  Marrying this man in 1945 must have been a comfortable safety from her nightmare-ridden childhood, from the terrifying memory of the friends and family would could not, as she had, escape the cry of Juden Heraus.  Her children were safe from the freight train, but she could not deny her self.  She would accompany him to his church, sing songs of praise to his Jesus and sacrifice her children to his fanaticism, but she would not convert.  No holy water would ever wash away the receded passion for her heritage.

I watched his hands as my words penetrated the wall of his illusions, and I was sure their invasive nature would strike him dead . . . or that his tense and throbbing hands would execute me.  Either way, I expected justice would be served.

Instead, a great calm descended on him.  The sun was higher now and bathed him in its full light.  He unclenched his fists and closed his eyes in a moment of silent prayer Then he opened them, smiled beatifically and said simply, “Breakfast is probably waiting.  You know how much your mother hates that.  We should go eat.”