When Charlotte, my mom, was not quite six, the family uprooted and moved to Zagreb.  Though he was a civil engineer with advanced degrees from the University of Vienna, Papa found that his Jewishness impeded employment; he had turned to sales and opened a new territory in Croatia, representing several European textile manufacturers. He subsequently opened a wholesale store and a textile mill, and he began to prosper.  Life seemed good. 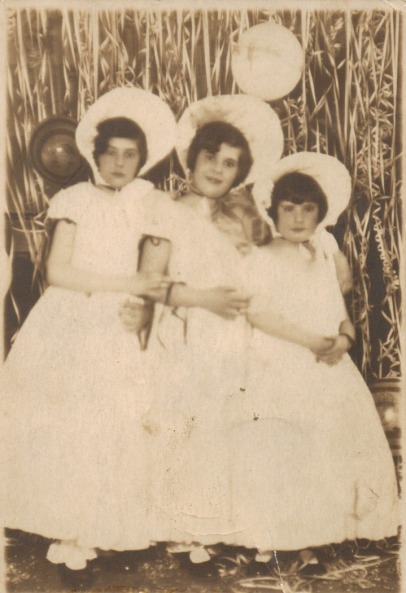 When comparing herself to her sisters, Mama (center) described herself as oversized and clumsy, a boyish blunderer; but none of the photographs from the time attest to that image.

Charlotte considered herself grotesquely large and healthy in contrast to her sisters. Thea had always been wan and delicate, prone to illness; now there was Ruth, two years Mom’s junior, who was so sickly, as an infant she had required a transfusion, which she got directly from their father, who lay on a gurney, connected to her by the tubing that carried his blood the short distance to her little thigh.  Ruth officially took over as Papa’s darling, so Charlotte studied cello and played team sports in order to protect her position as the son her father didn’t have.
In 1927, the family finally did add a son — Hannes Edward — but Charlotte did not denounce her throne; she was the designated “son” and took on all the responsibility attached to the role. “I was the one,” she would whisper, as though her brother might be in the next room listening, “with perpetually scraped knees from climbing trees.  They kept Johnny wrapped in cotton wool, but not me.  You know what I loved to do?  There was a pecan tree in our yard in Zagreb.  I found branches that would hold me just so, and I would sit in that tree for hours reading.  I read all of The Three Musketeers there, then I would climb out of my tree and challenge my dog, King, to a duel.”

The world turned upside down in 1932, and it did not right itself for a very long time.  In January of that year, Thea, just five months shy of her 12th birthday and a ballet prodigy, having only recently recovered from a near fatal bout with scarlet fever, was struck with meningitis and died.  Charlotte, who had prayed for illness, had been profoundly jealous of the attention her sister received, was devastated and blamed herself for the tragedy, convinced that her parents would have been far less afflicted if it had been she and not Thea who had died.  She told me, “I used to go to the cemetery and sit on Thea’s grave for long conversations.  I was only ten.  It was a great weight I carried on my shoulders.”

My grandmother was undone, and her health deteriorated in multiple ways, leading to conditions that eventually addicted her first to morphine and then to alcohol.  “Papa went a little berserk,” Mom would mutter, as though admitting it were tantamount to denunciation.  He became ultra-religious and drove his family to near insanity with his obsessive adherence to details he hardly believed in.  Charlotte became more committed to her cello; though she longed to dance, she couldn’t — it was a realm that belonged to Thea, and besides, she believed that no one would “think of giving a roly-poly girl ballet lessons.”  But she was a talented musician and studied religiously, eventually performing often in concerts and recitals.