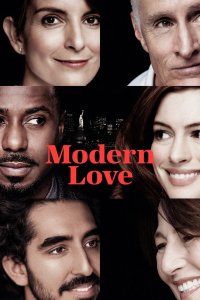 As a fan of the New York Times “Modern Love” feature, I eagerly binged through the eponymous new series on Amazon Prime. I wish I could say my fandom has extended itself. I cannot. Turns out to be just one more proof of how willingly pop culture aggrandizes schmaltz.

I imagine the proliferation of melodramatic sentimentality is a reaction to the seething anger that surrounds us. Ugly racism on the Alt-Right and pandering on the Alt-Left leave no one safe from vitriolic accusations and slurs, physical jostling, social discomfiture out in the world. Whoever we are, wherever we go, we are assaulted in one way or another. Soppy, mindless nostalgia is a reasonable soporific. I wish it helped me. I guess I’m too cynical.

I’ve never been good at soporifics. They trigger anxiety. For me, hyper-emotional dramas are like post-op pain pills. They briefly soothe the symptoms, but when they wear off, everything hurts more than before the medication. Escapist entertainment reminds me how much work life requires, how much more pain there is when you expect none. Then too, it comes dangerously close to inspiring resentment.  Why can’t I find what these phenomenally lucky folks have found? What a colossal loser I must be.

I don’t enjoy being jaded. I am by nature an optimistic pragmatist. When at first I don’t succeed, I plod on. I want to believe I’ll discover gold in one of the veins I’m exploring, but if I don’t, well, the work’s its own reward.  That’s a lot harder to pull off when prevailing media offerings constantly suggest that everyone else can easily find what remains for me elusive.

Every episode of Modern Love tantalizes with elements of truth. The actors in the series are wonderful – not a bad one in the bunch – but the writing is shallow. Okay, the stories are based on essays that are 1500 words or less. But a screenwriter should be able to create fleshy characters, who talk like people talk. And am I the only one who notices that there is not one episode that follows someone who lives in a middle- or working-class world? That poverty is nonexistent here? Every one of the lovers here has a fabulous apartment that is fabulously decorated. They all have amazing jobs and work among titans. More reasons I should feel unworthy. 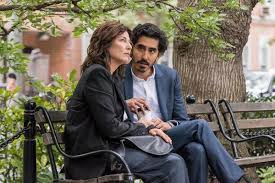 In the episode entitled “When Cupid is a Prying Journalist,” Katherine Keener plays an almost-believable character . . . an older woman giving advice to a thoroughly make-believe young genius (Dev Patel) millionaire (of course) about the pursuit of happiness. The characters in “At the Hospital” are so hopelessly hip their love seems fake and contrived. The heroine of “So He Looked Just Like Dad, etc . . . “ is boringly stupid. Is any young woman working in NYC (and living in such upscale digs) really naïve enough to think a leering, sex-starved older man would moon so unabashedly over a girl for whom he has only paternal affection?

Jane Alexander, an actor I deeply admire, plays a character who serves cheap baloney in “The Race Grows Sweeter Near Its Final Lap.” Up to a point, women might possibly imagine that being over 70 is romantic in some way, but we who have passed that Rubicon know better. And the actual probability of finding the kind of love Alexander’s character discovers is as likely as finding a clean spot on the subway floor.

Or is this just one more way of telling me how inadequate I am?

Older men who seek older women invariably look for someone to mother them, someone to listen to their monologues, someone to call 911. I would love to believe there is a man like James Saito’s character for each of us out there, a gentle man who listens enthusiastically, who shares interests but revels in each of the couple’s individualities. Forgive me if my experience makes me skeptical.

My most recent disappointment happened last month. I met a man who enticed me with what seemed to be a real interest in me and in my work. But the moment I ventured to get to know him – first by electronic messaging, then telephone, and finally on an actual date with him – he became a lecturer. He took to telling me what I like, what I look for, what I am. Assuming I knew nothing, he regaled me endlessly with his erudition. He asked me what I’m writing about, and before I got to sentence number two about the project I am struggling with, he was off on a tale of how he saved a woman writer he had been hired to edit.

On our date, when the monologue turned personal, and he was discussing his marriages or children or something, I made a comment about the complexities of motherhood, how women are easily eclipsed by childbirth and child-rearing. He interrupted with a story about how lucky his first wife was to have had him in the delivery room because he was able to relieve all her pain because he knew the right place to touch. That was immediately followed – without so much as a breath – by the story of how he sailed up the coast of Spain to save a woman who would have bled to death had he not liberated her and applied his EMT skills.

I took the advice of the Madagascar penguin. “Smile and wave, boys. Smile and wave.” I smiled – and nodded – and waved goodbye.

Every day for the following week, I received endless incoherent soliloquies or solipsistic PM messages on Facebook. Each time I replied and asked questions, he rejoined with yet another harangue. None of my questions or comments was acknowledged. I finally asked him point-blank if he had any interest in me. If so, I said, please demonstrate it. Call me, write me a question you allow me to answer, engage with me. Interact. I haven’t heard a word from him since I made that request.

If I were to judge myself by Modern Love standards, I would have to assume I am a ragtag reject. 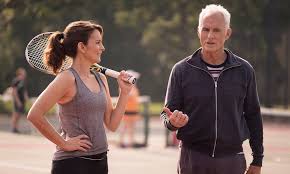 If only life were so winnable as it is in the series. Would that playing tennis might have volleyed my marriage back to life as it did for Tina Fey and John Slattery’s characters in “Rallying to Keep the Game Alive,” written by Dennis Leary’s real-life wife Ann. Would that any one of the few boyfriends I have had since I divorced twelve years ago had been so quick to acknowledge their role in our absence of communication. At least this episode was honest in its depiction of the separate worlds we build when we are supposedly fused to one another. That was something.

The one episode I really liked was the one I expected to hate. I am not an Ann Hathaway fan, and I was put off at first by the specter of Hollywood glitz. But in “Take Me as I Am, Whoever I am,”  I was won over by the sensitive, detailed glimpse into the bi-polar world it provides. Hathaway, with no little assistance from the script, nailed both the manic hyper-high and the paralyzing despondency, the need for a truly accepting ear, the struggle to maintain the most basic of human relationships. Let alone love. Finally, a protagonist who doesn’t miraculously get everything she ever wished for in 50 minutes flat. Finally, an episode that ends realistically.  Hathaway’s character vows to stay on her meds and talk often to her physician. That is all. She is content. 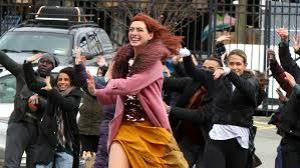 And that is the best kind of happily ever after I can imagine.