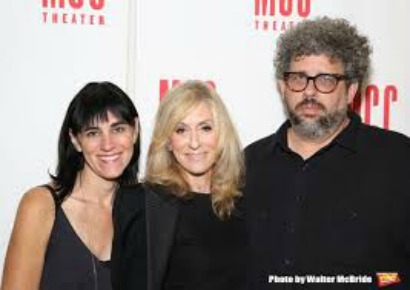 Theater Review: All the Ways to Say I Love You
written by Neil Labute, directed by Leigh Silverman, starring Judith Light

As the house fades to darkness in the Lucille Lortel Theatre, Judith Light seems to bring up the stage lights as she makes her entrance. She crosses down center and stands absolutely still for a moment. She is pensive, oblivious to the applause from the audience who, having not yet met the character, cheer for the star they recognize. She waits for a beat before she walks to Stage Left and slowly crosses back to Stage Right, each time stopping to scrutinize the first few rows of the audience, clearly looking for “someone” to talk to.  Judith Light disappears, and her character Mrs. Johnson launches  into the monolog that is All the Ways to Say I Love You.  The result is a 90-minute stream-of-consciousness outpouring, the unpacking of personal history and emotion by Mrs. Johnson, a woman who has lost herself in the jumbled morass of others’ expectations and her own passions.

Judith Light as Mrs. Johnson, in The MCC Theater Production of Neil LaBute’s All the Ways to Say I Love You, directed by Leigh Silverman, now playing at the Lucille Lortel Theatre, 141 Christopher Street, NYC. (Photo by @JoanMarcus)

The experience of following the Mrs. Johnson’s narrative, deftly written by Neil LaBute,  is something like being on multiple amusements at a fun park, riding them in such quick succession that there is no way to regain composure.  Mrs. Johnson recounts her life, breathlessly purging herself in chilling, even sometimes disgustingly vivid detail, leaving the audience as winded as she is.  Even the silences, the long pregnant silences, don’t enable her to breathe.  She is thinking, feeling, processing, and the effort of it exhausts us as it seems to deplete her.  But then she rallies, and her energy seems boundless, as she drags us into yet another corner of Mrs. Johnson’s past.

Light’s commitment to her character is absolute, unflinching.  She introduces herself at the top of the play as a high school English and drama teacher doubling occasionally as a guidance counselor, who has perhaps given her life to her profession while withholding too much from her marriage.  Allowing herself some self-deprecation, she amuses herself with her witticisms, even as she reveals, in the first few moments, that this will be the story of her relationship to a whopper of a falsehood.

“What is the weight of a lie?” she says a student once asked her, and though she goes on to say that she was unable to answer the question then, there is no doubt that the play is about to provide one.  Over the next 90 minutes, in fact, she peels back the layers of linen that shroud her lie, laying all its harrowing consequences bare and judging herself guilty. She has sentenced herself to a life of misery.

LaBute’s writing draws the audience into the judgmentalism of the moment, so much so that they are left with a sense of a larger crime even than the one to which Mrs. Johnson admits.

“She’s a pedophile,” I heard a woman scoff as she jumped to her feet to join the standing ovation at play’s end.  “I don’t understand why I am so enthusiastic.  I’m applauding a blood-sucking pedophile.”

In truth, it’s a trap LaBute has set most effectively. From the start, Mrs. Johnson makes it clear that she has indeed broken the laws of all that is holy to any sentient being and has had a prolonged affair with a student, but she has repeatedly mitigated that pronouncement by emphasizing that she did so with “a second year senior,” meaning a 19- or 20-year-old, clearly someone past the age of consent.  There is no pedophilia.

“He’s a rapist,” says the woman’s companion.  “I should hate her.  Why don’t I?”  Perhaps, I think, because there is no rape.  Again, LaBute has muddied the waters with a shadow of doubt; Mrs. Johnson clearly states that it was the boy who made the first moves, that it was he who insinuated himself into her life before she chose to allow him access.  It’s a subtle nuance but critical to the character because her little loopholes are the devices that enable her to maintain a modicum of self-respect, and allow her to believe herself a good teacher, a wise counselor, a loving parent with less delusion.

I felt close to this character.  She has, like so many women in my generations, tried to shrink herself to fit the prefab molds she’s been required to fill.  She has sublimated herself to the work that now defines her, but she has received no rewards for her efforts.  And she has fallen into an abyss most sentient adults would have avoided at all cost, has lost herself to the delusion that, having given so much, she deserves to take something for herself.  It’s not entirely her fault, but we will blame her nonetheless. Her Fifteen years in the classroom, teaching English and directing the drama club like Mrs. Johnson, her story resonates in me.  I knew my share of bold boys, those who envisioned themselves men enough to seduce the teacher.  And I knew how tempting some of them could be.  Male entitlement has the potential to beguile and can be a powerful aphrodisiac.  Most of us realize that to give in is idiotic folly, and we never do, but for Mrs. Johnson, the stakes are complicated.

Her husband, a mixed race man, has suffered many hardships for standing out as different in their small town community.  Over and over, she tells us she loves him, she will do anything to save her marriage. He wants children. Desperately, she says.  But no matter how hard they try, they remain childless.  She wants him to excite her, and she longs for him to find her attractive; but as they try more arduously to make a baby, they lose interest in one another, all of which renders her as vulnerable as a woman can be.  That boy is insistent, and he has a hunger for her that is irresistible.

That hers is a terrible mistake, one predicated on a huge fabrication, is undeniable, and she will be punished. Endlessly.  Which, I suppose, is how the women were mollified and convinced not to lynch the actor at the end of the play.

Even as I found Mrs. Johnson a reliable narrator of her tale, I couldn’t help wondering how much of the story lives in the character’s head, how much is the dramatic story she fed herself during times when teaching was, as teaching can be, stultifying, when she felt her creativity drained, and all her efforts were on her students’ or her husband’s or her lover’s behalf.

The silences on stage enhanced my sense of the character inventing herself as she went along.  Long, pregnant silences orchestrate transitions of story, mood, tone; they are silences most actors and directors fear.  Light and Silverman plumb their depths, and in their deafening stillness, we see a woman growing older, fighting the urge to enlarge the truth while persistently diminishing realities.

So, I am still not sure how much of what Mrs. Johnson remembers is the babbling of a woman descending into old age, seeking comfort in believing that once, even when it was totally inappropriate, she sacrificed herself to love.