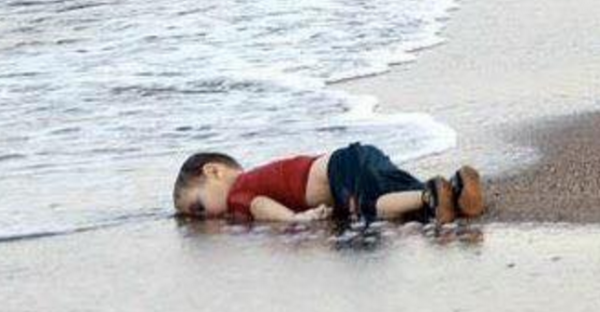 That photo. The Syrian baby lying face down in the water.

I can’t bear to look at it, yet I cannot look away. That beautiful child, so like children I have loved, so very like my own grandchild now living in a faraway land, who will never feel welcome in her parent’s homeland.

As the child of immigrants, who would not exist had my family not figured out how to circumvent the ban on refugees in 1939 that deemed Poles too dark, too swarthy to be admitted, especially if they were Jews, how can I not abhor the implications of that photo? How can I not scream murder, now that the Predator-in-Chief has exercised his Executive Privilege and has broken the law by banning refugees from seven countries, including Syria, whose people are being massacred and cannot stay where they are.

In school, the lessons we learned in Civics classes taught us that America was not only the land of the free and home of the brave but also the land of Checks and Balances. We have three branches of government so that no one branch becomes too powerful. Why is the judiciary allowing this flagrant law breaking to happen? Why is the Legislature not standing up for the laws they have enacted?

It is clear that it is up to us, The People to demand that our Union be treated with respect. We cannot accept the abuse, cannot allow the current state of affairs to become normalized. We must defy this executive order that, like the other 44 that have been ramrodded through in the past ten days, defies understanding. And this executive order is the one that is the most indefensible thus far.

Because this order sets a precedent. It paves the way for more heinous implications. It puts every one of us in jeopardy though it is being advertised as a measure to protect us from interlopers. In truth, it is a measure to divide us, to terrify us, to make us look for bogeymen in our closets, under our beds, next door, in our communities.

And in time, it will allow each of us to be banned in our turn.

The bare truth is that not one American has ever been killed by anyone from any of the seven banned countries. Even 9/11, which was one of the few acts of violence enacted on American soil by outsiders, was not perpetrated by anyone from any country on the banned list. It was orchestrated almost openly, defiantly, by Jihadists in Saudi Arabia, a country with whom the Bushes were accused of colluding, a country with whom the Trump Koch oligarchs who want to strangle America have deep financial ties, a country saliently not included on the ignominious list. The countries listed are homes to some of the poorest, neediest, most endangered souls on this earth.

There is a pattern here, part of the pattern being woven domestically. The Oligarchy is moving toward hording all our resources. It will eliminate the poor and the working poor and the middle class by putting health care and assistance and ample education out of our reach. And it will circle the wagons to keep the poor out and let only the wealthy in

Yet Americans buy the Kool-Aid, drink it willingly, feel grateful that they are being protected from some encroaching danger that is aiming its slings and arrows at the core of our existences. It’s easy to stick the Muslims out. So many of us don’t comprehend who they are, what they represent, what they believe. Propoganda is powerfully effective, the sugar that sweetens our sadder realities.

Terrorism by Muslims makes up less than one-third of one percent of all murders in this country. A far greater percentage are the result of domestic violence, violence that this administration would like to decriminalize.

This same administration will make it increasingly impossible for gun safety laws to be enacted. Your neighbor’s middle-aged aunt in Somalia who needs a heart transplant may be blocked from entry to our country, but guns being transported from illegal points of distribution worldwide are under no such scrutiny. Any angry husband almost anywhere in America can find a way to get a gun to kill his family.

The current nominee for Secretary of Education suggests we need guns in schools to protect our children from grizzly bears though she cannot have possibly missed the fact that not one single child has been massacred in a grizzly bear attack. Many have, however, been cut down in far more grizzly attacks by disgruntled white teenagers or white supremacists or locally disenfranchised misfits, for whom assault weapons are easier to obtain than Twizzlers.

No single school at any level in any community of any part of this country has been attacked by terrorists from anywhere abroad. But since a heavily armed, sociopathic teen gunned down twenty six- and seven-year-olds plus six of their care givers and teachers, gun violence in schools continues its steady rise.

Somehow, it has become okay for white psychopaths to terrorize our families, but it’s not okay for the huddled masses to seek refuge in the arms of Lady Liberty.

Most shocking to me is that there is a faction of pseudo-religious zealots, who call themselves pro-lifers cheering for these Draconian measures, trumpeting their approval, insisting that our resistance should be put down. They claim to advocate for the unborn children who deserve to live.

How can this photo not move them to rise up against such blatant hypocrisy? 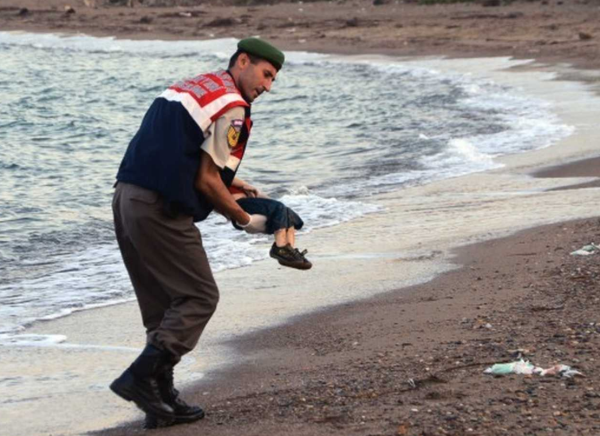