No doubt about it, The Impossible is a well crafted film.  The Tsunami is impeccably recreated, the acting is superb, and the script orchestrates intermittent tears with the deftness of a klezmer clarinet.  I hated it.

Don’t get me wrong.  I admire the filmmaking.  Director Juan Antonio Bayona (The Orphanage) has crafted a remarkably terrifying horror film out of a natural disaster, and he has captured the aftermath with paralyzing clarity and alarming accuracy of detail.  He has harnessed a physical violence no Freddy Kruger film could possibly find.  And that is just what troubles me.

What is the point?  That we should respect and fear Nature?  Okay, I agree.  That tourists should stay away from Thai beach resorts?  What other recourse if you want to avoid the risk of being swept up in this kind of maelstrom?

I wonder if Bayona might have made that point more effectively if he had written more about the aftermath of the ordeal, more about the emotional violence every one of those survivors must surely have suffered in the months, now years, since the tragedy.

This is no Titanic or Ship of Fools with disparate characters thrown together and forced to recognize one another as fellow passengers on a death-bound express.  And therein lies, for me, the rub.

This is one family’s terrifying wrestling match with Fate.  We know precious little about them, and that’s all we need to know. Mom Maria (Naomi Watts)is a non-practicing doctor and Dad Henry(Ewan Macgregor) has a job in Tokyo; she has a hankering to go back to England, and he is ambivalent.  Their three boys Lucas, Simon and Thomas (Tom Holland, Samuel Joslin, and Oaklee Pendergast) are pretty typical — entitled, smart, cute.  They make a perfect group to illustrate the blindness of fate; why does this family survive when so many others were so less fortunate?

In perfect horror film cadences, Bayonna lulls his audience into the family’s idyll — not just their vacation in this perceived Phuket paradise but, moreover, the fairy-tale perfect family they embody.

Maria is beautiful, bright, calm and loving; she soothes her husband’s worry when he gets a text that implies he might fact difficulty at work.  Henry is handsome, intelligent, affectionate; he spends most of the time before the storm playing with and hugging his boys.  Then, knowing the viewers are securely tucked into the family’s Christmas paradise, he dashes them against the  harrowing flying debris — cars, trees, homes, animals, mud — and bloodiness of the tsunami.  The audience reels in the center of the mayhem along with the family as they are torn asunder, roiled in the brine, dashed back to land, remaining on the brink of disaster every minute of the film and until they are, miraculously, reunited and sent flying off to Singapore to begin their happy-ever-aftering.

Which, from where I stand, is where the real struggle will begin.

More than the moment-to-moment endeavor to keep breathing, the life they all move onto will most certainly be fraught with strife that few films, few novels thoroughly investigate: the real struggle for survival, the one that starts after calm returns to the world.  One of the trailers boasts that nothing is more powerful than the human spirit, but in the awful 72-hour wake of the immediate tidal wave, we only see the beginning of the test.

Several times in the course of the film, Bayona’s camera confides the horrors the family witnesses on the way out of mayhem.  We watch, rapt with fear and dread, as Maria comes up from the brown abyss, gasping and moaning.  She sees Lucas, still a self-absorbed child, clinging to flotsam, whining, “Make it stop, Mommy.  I don’t want to be here.”  Then, despite all indications to the contrary, the two manage to connect, and so Lucas begins his fast-forwarded transformation into manhood, while Maria learns to allow herself to be parented by her child.  No doubt about it, the human spirit is boundless, and these two are riveting in their courage. 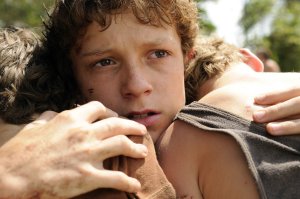 But then the movie turns quite ordinary, sluggish, boring.  It begins to rely on tear-wrenching moments of great pain and emotion-numbing relief as the rest of the family is recalled to life.  There are some lovely bits — Lucas learns to find solace from his suffering by relieving others’, an old woman (Geraldine Chaplin) bonds with Simon under the stars — but we know how it’s going to end, and after a while we just want them to get on with it already.

The interesting stuff awaits them.  How completely must the nightmare in the water murder all their sleep from now on?  How entirely will the PTSD interfere with their interpersonal relationships?  How will the acrid smell and the visual obscenity of all those rotting dead cast along the shore, the road, the ditches on every inch of each one of their journeys to find one another?  How will their survivor guilt manifest?

Some fine acting has been captured in this movie.  Neither Watts nor Macgregor, who are usually fine, has ever shown more polished chops, and the boys are natural, believable, delightful.  Tom Holland emerges as the real find of the movie — his performance is subtle, nuanced, mature way beyond the actor’s sixteen years.

But how much more could this director have wrung from all that talent if they had had some human opponents to battle.  If, for example, they returned to England and found that no one remembered what they’d been through and just assumed that because they’ve lived, they should be nothing but grateful.  Or if Mom becomes a workaholic because she can’t shake the feeling that if she hadn’t been on so decadent a vacation, one of this would have happened.  If, after the idyll was dispelled, he had taken them back to — horror of horrors! – – real life.