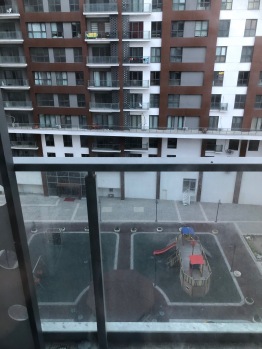 From my window, I have a world view I wish I could share with my fellow Americans.

I am currently in an apartment complex in Istanbul. On the European side. Four separate entrances to four connected but independent buildings comprise the 12-story structure that wraps itself around a large courtyard, a recreational close.

In the center of the courtyard is a very large gazebo.

With ample seating for at least 20 adults and floor space for at least as many children. Much of the day, it is occupied by mothers and a few fathers, who chat amongst themselves while their many children run exuberantly about. They are often there until well after 10 PM.

No one in any of the flats that face the courtyard fears missing the opportunity to be part of the communal scene. Each apartment faces the square, and curtains on the sliding doors leading to a small balcony are invariably open. By placing a couch set at the sliding door, inhabitants extend the indoor living space out into the world of the square. Sound carries easily. From the comfort of home, they intermittently call to one another, supervise unruly children, and engage with the flow of life below.

I imagine our neighbors wonder what is wrong with us that we are so anti-social as to keep our windows covered, our doors closed.

Solitude, then, is not the ideal here. Personal space is meant to be shared. It extends beyond our courtyard into the activity that bustles about us. On the street, in stores, at the local market one is likely to feel crowded even when there are no more than a few people nearby. Walking close to one another seems a requirement on the walkways. Driving far too close is common practice on the roads.

Life here is on a clock set for summer hours. Revels extend late into the night, and nearly nothing stirs before 9 AM, even on workdays. This is lucky for me. My need for alone time, for the wide berth of privacy, is satisfied by my early-morning sessions in the exercise room or by eschewing the sun-drenched outdoor pool in favor of the dimly lit indoor equivalent.

I adjust to what might feel like perpetual invasiveness, even when people are staring at me with great curiosity. The ultra-communal atmosphere fascinates me. It instructs me about the world to which I will soon return.

In my neighborhood in Harlem, apartments are built to ensure the most privacy one can hope for in a crowded city. They are built with an American sense of individuality. Bolted doors, barred windows help to reinforce the notion that boundaries matter.

It is a notion that is just as foreign to many of my neighbors in Harlem as it is to those here in Istanbul. Like my neighbors in this courtyard world, my fellow Manhattanville residents are from places where the house is the place to sleep. In the warm climes – in places like this part of Turkey, the Caribbean Islands, large sections of Africa, Asia, South America, and the Asian subcontinent — the cultures encourage and even require communalism. Folks often and comfortably congregate in courtyards, on the beaches, in the marketplace. In Harlem, they replace the familiar sharing places with city sidewalks, local parks, even the local grocery stores.

I have been known to grouse about the way the habits of the collective affect me, interfere with my limits. Though I crave diversity and delight in the culinary benefits these strangers have brought to my city, I also complain about the things that niggle.

Watching the courtyard below me in this very foreign place is a kind of revelation, a reminder of how fortunate I am to experience this perspective changer.

I pledge to remind myself often — at night, when I wish the noise on the street would just stop, on my block, when I am having trouble walking quickly because of the lawn chairs and hibachis blocking my way, in Whole Foods when another shopper’s cart refuses to move more than an inch from me, on my way to work when the tourists walking four abreast slow my progress from point A to B, in my own apartment building, when it is abuzz with folks iding together – that my way of living is not universally the best. Awareness and perhaps a set of earplugs should enable me to adjust my point of view.

We white Americans have made a history of co-opting, usurping, and/or obliterating all traces of Others’ cultures. Our national beginnings are fraught with murder, enslavement, criminalization of anything un-white. We have stolen food, customs, traditions, language, and culture and have forcibly replaced what belongs to others, requiring that they embrace what is ours. We have taken this imperialistic attitude to the world, earning us the moniker of Ugly Americans. And in the time of Trump, we are doubling down on our insistence that the Other be like us or get out.

I don’t like what we’ve become, we white Americans. We are a fearful, suspicious, hateful lot with little understanding of these others settling on our shores. They are not here to take anything away from us. Yet we treat them as though it is a bad thing that their difference threatens our blandness. Every American should spend a week looking out of my Istanbul window and see that there is no harm in retaining individuality if that is what we want. We might be irritated by a handful of inconveniences, but in the end, our lives are enriched by allowing ourselves to observe and grin.

Perhaps a week at my window would engender a sorely-needed American attitude adjustment. Liberals need to see that while the people of the heartland have lacked exposure, they can watch, smile and accept with the rest of us. And so-called Conservatives need to shut up and listen, taste, touch the joy that happens in this courtyard. We can all adjust.

It’s so simple. Really. You may love your hamburgers, sandwiches, and wraps, but once you’ve tasted kofta or börek, you’ll know something more delicious. Preserving tradition is fine and dandy, but it’s always a sure bet that adding something new can give your life a whole new dimension.