* re-printed by permission of the Columbia: a journal of literature and art, where it appears on the Blog Site

In the room the women come and go
Talking of Michelangelo . . . .
T.S. Eliot. The Lovesong of J. Alfred Prufrock 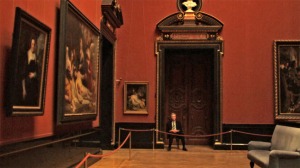 Museum Hours recalled an epiphany I experienced on my way to my wedding.

Sauntering from my apartment on Riverside Drive to the chapel at Columbia, seeking to memorize the details of my last moments of freedom, I made a special point of looking into the faces of the people I passed. I had only recently graduated from adolescence into my 20’s, and like most of my cohorts, I saw myself as the center of life and substance in the universe. But, of course, my being on the threshold of a seismic life change was of no consequence to anyone around me. And what surprised me when no one returned my gaze – hardly a soul so much as noted my existence – was that I was not disturbed at how non-noteworthy I was. It felt right. I suddenly saw with utter clarity that my story was just one among all the stories bustling about. Our lives mingled with one another like the aromas of automobiles, coffee, cigarettes, bacon, garbage and spring flowers wafting in the breeze; while each possessed a singular uniqueness, all blended smoothly into a single May morning landscape.

Museum Hours meanders thus, like a leisurely walk across campus or a thoughtful mosey through a gallery. It lingers, at both expected and unexpected intervals, to examine the layers of imagery, the texturing of impressions that create the large and small occurrences that memory accumulates, and it moves from moment to moment without ceremony, shifting from one to the next without releasing the one that came before. The film sees life as both revelatory and mundane in the same instant. And the conversations, colors, music, ambient sounds, sights and smells create a kind of cacophony that conspires both to obscure the individual components and to illuminate the distinct strengths each brings to the choir. 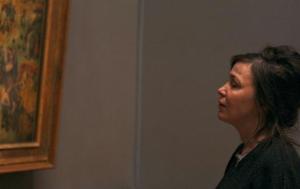 The film is a pentimento similar to a masterwork by Peter Breughel the Elder. Breughel’s work is a kind of template for the film. The 16th Century Dutch master’s particular affinity for creating multiple strata of scenarios in every frame, for securing both the key to the broad spectrum of the painting and the insight on each particular picture by way of details illuminated in color and light, resonates here. Like Breughel, Jem Cohen, provides a wide view of life and then through the magic of his medium, which has the added benefit of sound and movement, he hones in on myriad points of view.

Like the central characters in Breughel’s work, the two apparent protagonists of Cohen’s film serve as foils for the many players that swirl about them in the museum, in the hospital, on the streets, in the local pub, and their stories irradiate innumerable others. Anne (Mary Margaret O’Hara) has been summoned to Vienna to attend the deathwatch of a cousin she grew up with but from whom she has long been separated. She wanders into the Historisches Kunstmuseum and meets Johann (Bobby Somer), a guard there. She asks him for directions and confides her predicament to him; he offers to be her guide and interpreter. Over the course of the movie, they forge a deep friendship, reveal details of their personal lives and provide succor and comfort for one another. For each, the other is a mirror in which a hitherto unseen self appears.

Anne is a babbler. She talks in stream of consciousness at times, the way people do who have lived alone but have much to say. Johann, by contrast, is measured in his speech, not exactly guarded but less apt to simply offer what Anne identifies as her penchant for “too much information”. He never overtly hides anything, but when he discloses, he does so quietly, matter-of-factly. Anne asks Johann if he has friends or family who, like her cousin, have been far away so that “you don’t really know where they are anymore”; he answers that actually he has no one left to keep track of. His parents, a sister, and a partner – “he’s long since been gone”– are all dead. Johann shows Anne his favorite paintings and sculpture, and she reacts. “They don’t even look nude. They look proud. Like they’re not even ashamed. . . . I had a boyfriend, and I was so guilty about sexuality. Oh! This is too much information again!” He smiles, enjoying the discourse, feeling a wholeness he’s been missing. “ I had had my share of noise . . . and now I was enjoying my quiet . . . . Then I realized how much time I had been spending at home, by myself. . . . I had forgotten how much I loved Vienna. I liked seeing the city again, showing her my city.” 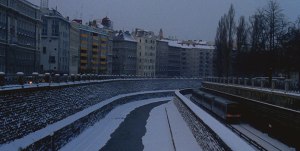 Together, Johann and Anne explore the tourists’ Vienna, but since, as Johann points out, “everything must be inexpensive,” they spend just as much time in obscure parks and in his favorite cafe, watching birds congregate on wires, townspeople relax over dinner, or old men make faces that resemble the museum’s Roman statuary. On their last day together, they walk to the hills overlooking the city in search of a congregation of starlings expected to take flight in unison, but when they arrive, they find no birds and wonder if the birds have already flown. They walk for a bit, then wait and watch while the camera rests on the sweeping view of grass. Eventually, the two stroll across the frame and disappear from sight while the camera continues to wait. The grass undulates, a cloud whispers slightly to the right, and just when you think you have see all you can possibly see, a new figure walks onto the path, and you realize that there are trees there that you hadn’t noticed before. But before you can truly examine the new dimensions, the camera releases you from that image and goes to black though you are still listening to the sound of the man’s feet crossing the grassy plain. In the darkness, you don’t remember Johann, Anne or the stranger so much as specks of color on a grayish canvas, errant birds, trees and cloudy skies.

Like Johann and Anne, we who watch the film will someday discover memories of that time in Vienna imbedded in the sediment of images and textures that have accumulated. Looking back, the gesticulation of fingers will be inextricably fused to the swaying of a roomful of dancers. The sound of a breathing machine will become indistinguishable from the noise of an early morning marketplace. 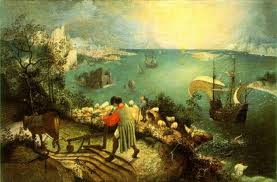 What Anne and Johann have spent their Museum Hours discovering and what they’ve shared with us is how the senses discern what the heart will remember, and their discoveries are a joy to behold. Life, like art, never reveals itself all at once. Icarus’s fall from the sky in a painting or a young woman’s pre-nuptial walk through town are mere threads in a fabulous tapestry that can be visited and re-visited without relinquishing its fascination. There will always be more there than meets the eye.