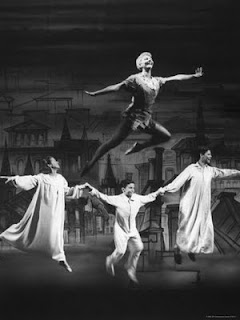 I was 7 when my mother took me to a friend’s house to watch the first telecast of Peter Pan starring Mary Martin.  While I loved Peter, I saw myself in Wendy(Kathleen Nolan), my more accomplished self, stuck in responsibilities, too pragmatic and obedient to just crow.  Jumping up and down with excitement, I watched her take off on her first flight, and I think that was the first time I remember crying for joy.  Wendy was saved.  No matter what, she’d never again be trapped in that holding pattern where a young lady is not allowed to be a child but isn’t yet respected as an adult.  From now on, when adults yelled at her, Wendy could escape, return to the joyous memory of flying.

Which made me wonder about Wendy’s mother.  Would she, like my mother, be impatient with the frivolity of childhood?  When Wendy was in her room writing about Peter, would her mother shame her into emerging from her cocoon to look after siblings?  Would Wendy’s mother be angry when Wendy slept too late after a night of fantasy-induced insomnia?  I concluded that Wendy’s mother must be far too enlightened for any of that.  No doubt, Wendy’s mom had had a spectacular childhood, and, as a result, took pleasure from her daughter’s fancies.  In short, Wendy’s mother was my ideal mom.  Every year, I’d watch Mary Martin fly away, leaving Wendy and Nana, and I wasn’t the least bit sad.  Because I just knew that Wendy was happily where she belonged.

How gratifying that Rick Elice has envisioned the perfect childhood for my imaginary mother.  His Molly (Celia Keenan-Bolger), the heroine of Peter and the Star Catcher, who will be Wendy’s mother someday, is strong and brave and smart and competitive and obnoxiously self-assured; she leads the boys into their life of perpetual childhood, a life she has even designed for them.  She facilitates Peter’s epiphany that allows him to meet himself and laughs in the face of Captain Black Stache (Christian Borle) as she thwarts his evil and sets him up as the favorite prey for the omnipresent croc.  In short, Wendy’s mother Molly is exactly the kind of girl I wanted to believe my mother should have been because she was who I wished I were.

Wendy isn’t the kind of girl who’ll grow up to be a man-hating feminist.  Nor will she ever want to be one of the guys.  She is proud of her femininity and then reveals that she is also unafraid to be soft and vulnerable. Celia Keenan-Bolger captures her brilliantly, her perfect voice and demeanor cloaking the girl (or is she really older than we think?) in vari-colored nuances that make her starkly real while still a figment of our collective imagination.

Wendy is not alone onstage.  She is surrounded by a brilliant company, swinging from role to role never dropping even a shadow of the thread.  Christian Borle could not be more enchanting as the company man and the dastardly Captain Stache. He chews up the scenery in a frolicking frenzy of masterful comic acting and then, to prove his true command of the craft, he revels in a line that pokes fun at himself for doing so — vowing that no croc is going to devour scenery while he’s onstage! 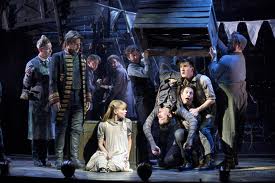 Peter and the Star Catcher Company

There’s no one who’s not terrific here.  Adam Chanler-Berat as Boy, Arnie Burton as Mrs. Bumbrake, and  Kevin Del Aguila as Smee may seem salient, but the whole ensemble deserves equal credit for bringing this romp to full-boar life.

Peter and the Star Catcher misses not one single beat in this production, now playing at the Brooks Atkinson Theater (http://peterandthestarcatcher.com).  Directors Roger Rees and Alex Timbers have found just the right pace, exactly the best staging, have chosen precisely the best creative team, and there isn’t so much as a single hiccup of error. 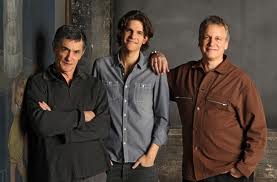 Which brings it all back to Rick Elice.  The best character in this play is The Play itself.  Pure theatrics at their most basically theatrical.  No pyrotechnics, no high gloss effects, jut flawless actors capable of endowing pieces of string with more life than a wilderness of monkeys.  Peppered with allusions to everything you’ve ever seen (or read) and loved before but rife with originality, this is a play that asks the audience to play along, to suspend disbelief in the suspension of disbelief and then gently forces us to believe long before Peter asks us to clap and prove it.

In the end, empowered by our own delight, we leave theater knowing that the vagaries of our lives and its multiple responsibilities will hereafter be mitigated by this memory of flying.