I’m Christmas-ing in Thailand this year, and it’s a relief to be away from what Americans call holiday cheer. At the risk of being accused of crusading against Christmas, I find the holiday, as it has evolved in the US, to be gruesome and overbearing. The real celebration for me is being removed from the ubiquity of obnoxiously perseverating Christmas song in every public space, omnipresent guilt-mongering in the guise of advertising, oppressive overlays of faux cheer, and incessant arguing over how to greet one another.

No one has stopped me in the street to say, “Merry, er, happy, er . . .” Few even know that there’s a holiday going on out there. In Bangkok, except for the occasional paean to the Capitalist Christmas in the form of a display of goods for sale and a few saliently out-of-place reminders, there are few Christmas accouterments at all. It’s like Calvin Trillin’s observation that Christmas in Tibet would be a “place where folks cannot remember/That there is something special in December”(“Christmas in Qatar,” The New Yorker, 19 December,1994).

Absent is the apparent outpouring of hyperbolic Christmas spirit. Even though this is a cosmopolitan city, with strong ties to the West, a large Christian presence, and a decidedly multi-cultural persona, including a huge contingent of expatriated Americans, Germans, Belgians, Russians, et al, one is hard pressed to find reminders that joy has suddenly descended on an otherwise morose world. 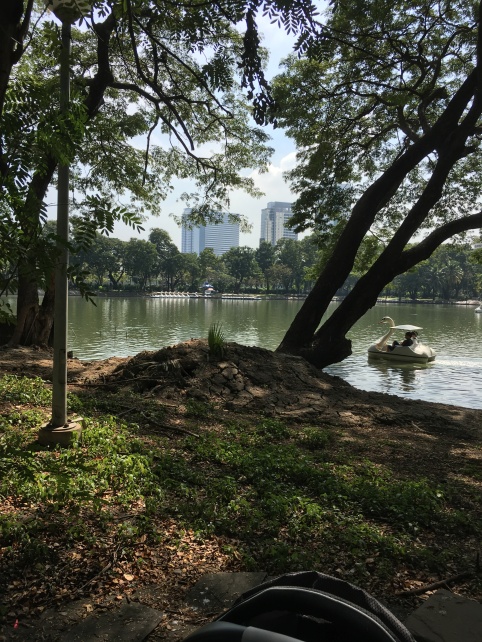 Christmas Eve, Lumpini Park, and not a Santa Claus or Christmas elf in sight (Photo by Stockton)

Some might attribute the absence of Christmas to the fact that Bangkok is 2,000 miles closer to the equator than is New York City, and December is a very hot month. Every time I emerge from an air-conditioned space, I feel like Tom Hanks’ character in Volunteers, descending from his plane into this country. “My God,” he moans. “We must be about a mile from the sun!”

But having lived in the Arizona desert for many years and having spent a few holiday seasons in Florida, I know it’s not the climate that’s to blame. People dwelling in warm climes might pay some lip service to the fact that they can’t get into the Christmas spirit without snow, sultry wintry wind, and delectable fires burning in their family rooms’ fireplaces. But they’ve adapted. No matter what the climate, people who want to decorate for Christmas will find ever more elaborate ways to deck their cacti – or palm trees, boats or sand castles – with boughs of holly and whatever else they can think of to connote the season. In Thailand, however, the landscape is bereft of palm trees disguised as Tannenbaums, of neon MERRY CHRISTMAS signs twinkling out of store windows.

While there is no outpouring of zealotry for the trappings of Christmas, people here are eager to honor one another’s traditions. Among those people educated in the ways of The Other, there is a genuine attempt to honor the fact that some do celebrate a very important holiday on December 25.

In the lobby of my hotel the proprietors have chosen an mp3 loop to play endless celebrity covers of every Christmas song imaginable, and on the screen, a slide show of snow-covered New England and old England scenes that seem odd, out of context, dislocated. But the intent is sweet. Every staff member greets every western looking guest with a heart-felt “Merry Christmas.” But they don’t worry about offending me for not saying Happy Chanukah; they really are unaware that there is such a thing, and I would not expect it. I am touched that they wish me happy anything.

Luckily, there are not a lot of Christmas displays in Bangkok, but they are not entirely absent. Photo by Stockton.

I doubt they’ll wish anyone a happy Kwanza, and certainly not because they are anti-Kwanza. There simply are no African-Americans staying here. Yet, I am sure that if there were or if a major Muslim holiday happened concurrently, they would be offering their best wishes with some customary acknowledgment, the equivalent of Merry Christmas. And when the time is right, they probably greet celebrants of Vesak or Diwali with appropriate greetings. There is no reluctance to call the day what it is, no fear of offending.

The Chinese Pavilion in Lumpini Park, Bangkok, like the other temples and memorials, are devoid of Christmas accoutrements.

On Christmas Eve, in that same lobby, I returned from an outing to find banana muffins laid out on a table in front of a sign scrawled in a childlike cursive that said, “Free. Merry Christmas.” I smiled at the desk clerk and bowed with my hands together to show my gratitude in the Thai way. She grinned back at me, bowing and likewise holding her hands together, saying, “Christmas cake. Very good.”

I asked the clerk if she celebrates Christmas. “Oh, no,” she said. “New Year only.”

I have never been a fan of the flap over what to say in the holiday season. It’s absurd, at least. Christmas is a specific day, and on that day to say Merry Christmas seems totally appropriate, especially in our country, which has designated Christmas a national holiday. To wish Happy Holidays on that day, seems as absurd as wishing someone a Merry Christmas the day after Thanksgiving, when many holidays approach.

We could take a lesson from my hosts here in Bangkok. If we embrace each day and call it what it is, if we honor our collectivity by understanding that Happy Holidays is all-inclusive, we show our respect for one another, for the individual attributes that make each of us a person. We acknowledge our differences while accentuating our common humanness.

What can be bad about that?